The dedication of the animal welfare team at Stockton-on-Tees Borough Council to protect stray dogs has been recognised with a prestigious RSPCA award. 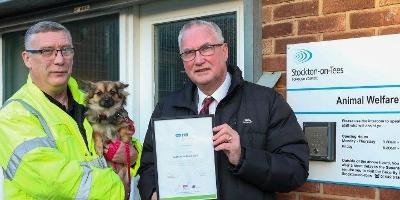 The team has won 'Gold' in the stray dogs category of the charity's PawPrints Awards 2021, which recognise organisations that go above and beyond to ensure higher animal welfare standards.

The accolade comes as dog ownership soars across the country, with national dog welfare charity the Dogs Trust warning last month it had seen a 35% increase in calls related to giving up dogs.

Councillor Steve Nelson, Stockton-on-Tees Borough Council's Cabinet Member for Access, Communities and Community Safety, said: "We're extremely proud to have achieved the Gold standard from the RSPCA for the 13th year in a row.

"Dog ownership has soared across the country since the pandemic began, but sadly that has also seen an increase in people reconsidering owning a pet as their circumstances changed post-lockdown.

"This award is a timely recognition of our animal welfare team who do such valuable work in taking responsibility to protect stray dogs in the Borough to ensure the health and wellbeing of these vulnerable animals. This is done in partnership with Dogs Trust and Stockton Security Centre.

"From April 2020 to March this year we have rounded up 196 strays and had 42 dogs handed over. Of the stray dogs 87% were reunited with their owners, and the vast majority of all the remaining animals were either rehomed or put into the care of Dogs Trust."

Rachel Williams, Senior Parliamentary Advisor for the RSPCA, said: "I know how much of a challenge the past 18 months have posed, and continue to pose, to everyone working on the front line of animal welfare. Winning a PawPrint this year, more than ever, is an achievement I hope the Council's animal welfare team are really proud of."

Stockton has achieved Gold status every year since the PawPrint Awards launch in 2008. In 2018 the council received a rare Platinum PawPrint - the highest RSPCA accolade a local authority can receive - after retaining 'Gold' status for five years in a row, and in recognition of the awards 10th anniversary.

It is a legal requirement throughout the UK for all dog owners to have their dogs microchipped and recorded from the age of 8 weeks. If your dog is not microchipped or your details are not up to date you could face criminal prosecution and a £500 fine.