Suspected crack den closed down by council and police 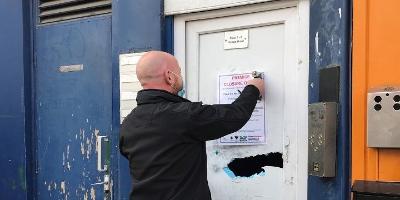 A suspected drugs den at the centre of constant anti-social behaviour has been closed.

The order means the tenant and her partner must not enter the property and it will be inaccessible to anyone for three months.

The property is now boarded up and anyone remaining at or entering the premises will be in breach of the Order, which is a criminal offence punishable by up to 51 weeks' imprisonment and a fine.

Teesside Magistrates' Court heard details of a series of complaints relating to incidents that have taken place in and around the property, including a large fight nearby on Friday night (May 7) which saw eight men arrested.

Councillor Steve Nelson, Stockton-on-Tees Borough Council's Cabinet Member for Access, Communities and Community Safety, said: "The activities in and around this flat have made life hell for residents and businesses in the area.

"The majority of the complaints relate to suspected drug dealing, people queuing at all hours of day and night, as well as fighting, carrying weapons, spitting, swearing, dog fights and drug taking.

"Nobody should have to put up with this in their lives and our officers have worked very hard alongside Cleveland Police to shut the property down and secure it. This type of behaviour just won't be tolerated."

A Cleveland Police spokesperson added: "Officers were called to the area of this address on the evening of Friday, May 7 after receiving a report of an altercation involving a group of men, some with weapons.

"Eight men aged between 28 and 46 were arrested in connection with the alleged incident and either released under investigation, or on bail with conditions while inquiries continue.

"The closure order is a great example of police and the Council working together to tackle suspected criminal activity to improve our communities.

"Anyone with information regarding the reported incident is asked to contact Cleveland Police via 101 quoting 072986.

"If you don't want to speak to police, you can pass information anonymously to independent charity CrimeStoppers online at www.crimestoppers-uk.org or by phoning 0800 555 111."