Group of flats described as "blight on the area" is CLOSED

A group of flats at the centre of behaviour which left neighbours too afraid to leave the house and suffering from sleepless nights has been shut down. 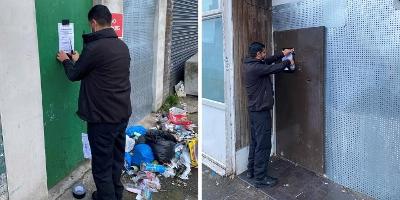 Stockton-on-Tees Borough Council, in partnership with Cleveland Police, secured a Closure Order in respect of the flats in Yarm Lane in Stockton today (October 19).

The order prevents access to the building for the next three months and anyone trying to enter the boarded-up flats can be prosecuted.

Teesside Magistrates' Court heard details of a series of reported incidents which took place in and around the flats over the last few months, including reports of fighting and the use of weapons.

Neighbours reported that drug deals would happen throughout the day with a constant stream of visitors to the flats.

One witness even reported seeing dozens of people entering the property within a short space of time.

Councillor Steve Nelson, the Council's Cabinet Member for Access, Communities and Community Safety, said: "Over the last few months this set of flats has really become a blight on the area - and the behaviour that neighbours have had to put up with is truly shocking.

"It's very sad that residents nearby have been living in fear in their own home and this closure order can thankfully bring to an end the turmoil they've had to endure.

"It's vital that neighbours can start to feel safe again, especially given the dark nights are starting to set in.

"Thank you to our Civic Enforcement Officers and CCTV Control Room who have worked very hard to secure this great result, alongside the local policing team and ward councillors.

"The message is clear that this sort of disgraceful behaviour will not be accepted."

Cleveland Police Acting Sergeant Mitch Baldwin said: "Police and partners will continue to respond to information and reports of drug activity and anti-social behaviour in our communities and we'll use everything in our power to tackle it.

"The closure of the address sends out a clear message to the public that we do listen to them and we do not tolerate criminal activity.

"If you have any criminal activity to report please contact us on 101 or 999 in an emergency. Crimestoppers can be contacted anonymously on 0800 555 111.