Stockton lights up in support of pension campaign

Stockton's Town Centre and Riverside have been illuminated with purple lighting to show the Council's support of a campaign fighting for fairer pension rights for women. 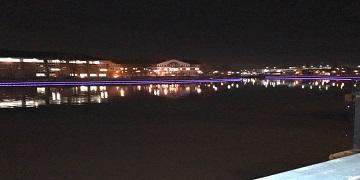 At a full council meeting this week, councillors passed a motion in support of the WASPI (Women Against State Pension Inequality) campaign.

In passing the motion, the Council "calls on the Government to reconsider transitional arrangements for women born on or after 6 April 1951, so that women do not suffer hardship due to pension changes that they were not told about, until it was too late to make alternative financial arrangements."

It is estimated that around two and a half million women in the UK are affected by the decision to equalise the state pension age for men and women by 2020.

Councillor Bob Cook, Leader of Stockton-on-Tees Borough Council, said: "This is an issue of fairness as the rise in the women's state pension age has been too rapid and has been implemented without sufficient notice being given to those affected - leaving them with inadequate time to make alternative plans.

"We're calling on the Government to reconsider these arrangements so that women do not suffer unnecessary hardship after working hard and paying their tax and national insurance contributions for decades.

"We will be writing to the Borough's two MPs to seek support for the motion, and the women affected."