What has Stockton-on-Tees got in common with Preston? Quite a lot according to this new report

A report on Stockton-on-Tees' answer to the much-praised 'Preston Model' has been welcomed by councillors. 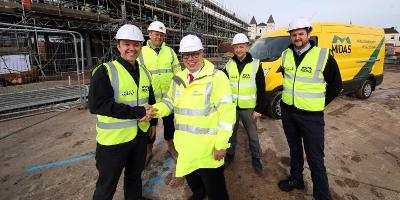 Based on the principle that large organisations like councils, universities and hospitals can build 'community wealth' by spending locally, the model has won national recognition and has also been adopted in towns such as Manchester, Oldham and Birmingham.

And a report to Stockton-on-Tees Borough Council's Cabinet yesterday (Thursday 13 December) revealed that the Council's efforts compare favourably with the model.

How do they compare?

Is there a good example of this at work?

Yes. As of October 2018, the principal contractor and sub-contractors working on Stockton's new Hampton by Hilton hotel had purchased £480,000 worth of materials and equipment from Borough-based suppliers and £580,000 from Tees Valley suppliers.

Furthermore, 37% of the workforce hails from the Tees Valley and 54% from the North East region.

A jobs fair was held for the new hotel which saw around 100 people attend to learn about the opportunities and it is expected that staff numbers will be strongly represented by people living in the Borough.

What do councillors think?

Councillor Bob Cook, Leader of Stockton-on-Tees Borough Council, said: "Though we don't use the 'Preston Model' term, the Council has proactively worked to improve wealth building in a community sense for many years.

"For example, when tendering contracts for projects we can build-in specific recruitment clauses which encourage companies to use best endeavour to make sure a strong percentage of new entrant jobs and elements of the supply chain comes from Stockton-on-Tees and the wider Tees Valley.

"It supports our policies of promoting equality of opportunity, protecting the vulnerable, developing strong and healthy communities and creating economic prosperity. We're performing well, but there's still things we can do."

Councillor Nigel Cooke, the Council's Cabinet Member for Regeneration and Housing, added: "The Council takes great pride in localising spend and investment in Stockton-on-Tees where possible and we're always looking for new ways in which we can do this.

"I was particularly pleased to see first-hand the positivity around our 'Meet the Buyer' events for the Hampton by Hilton hotel, Globe restoration and Ingleby Barwick leisure facility.

"They put local suppliers and contractors in contact with the principal contractors and since the events, we've had around 200 local companies registering their interest to be part of the projects' supply chains which is great news."

Is 'community wealth building' all about procurement?

No, it encourages a range of approaches aimed at retaining money in the area, increasing investment in local supply chains and improving local economic competitiveness for the benefit of all residents. These include:

An action plan will now be developed to build on the key actions identified in the report.

This will explore initiatives to expand the successful Meet the Buyer approach, consider contract processes and the establishment of a 'Stockton Local' Charter to develop partnership working between anchor institutions across the Borough.