Queen & Ben Elton's smash hit show 'We Will Rock You' is the first musical to be announced from Stockton Globe's star studded 2021 programme. 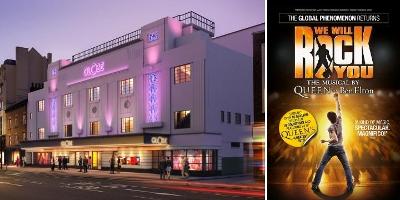 One of the most spectacular musicals to tour the United Kingdom & Ireland, 'We Will Rock You', will raise the roof at the historic art-deco venue from Monday 12th - Saturday 17th July 2021 with tickets on sale today, Tuesday 17th November 2020 at 10am.

'We Will Rock You' has seen unprecedented success in theatres and arenas all around the world since it began in 2002. The show has received continuous rave reviews and standing ovations in every town and city it has visited, and will be ready to pick up exactly where it left off when the new UK tour begins next year.

Councillor Jim Beall, Stockton-on-Tees Borough Council's Cabinet Member for Health, Leisure and Culture, said: "It's a real thrill to welcome one of the most internationally renowned musicals to Stockton and I have no doubt local audiences will be just as excited to see Queen and Ben Elton's famous story performed at the Globe.

"We Will Rock You follows in the footsteps of a long list of recent big-name announcements and really goes to show the diverse range of music, comedy and family acts the Globe will stage when it reopens next year. I have no doubt tickets for the show will be very highly anticipated.

Stockton Globe General Manager, Jo Ager says: "At Stockton Globe, we are really committed to bringing the very best in music and comedy to the area, so when we were given the opportunity to include 'We Will Rock You' in our programme, we grabbed it with both hands!

"The show is one of the best loved musicals in the world about one of the greatest ever rock bands, written by one of the finest comedy writers to come out of the UK so we are hugely excited for it to hit our stage."

The 3000+ capacity Stockton Globe is currently being restored to its former Art Deco glory by Stockton-on-Tees Borough Council, with support from the National Lottery Heritage Fund.

In May 2018 the Council established a partnership with ATG which will see ATG operate the Globe on a 25-year management contract. The soon-to-be-reopened venue will be the largest of its kind between Newcastle and Leeds. Also launching as part of the refurbishment is a 250-capacity event space housed in the adjoining building.