Additional £2.75million funding for roads resurfacing, enforcement and street cleaning across the Borough - here's how it's being spent 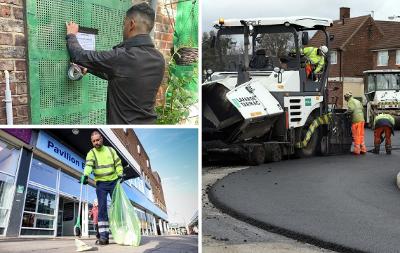 Details of how an extra £2.75million is being spent on roads resurfacing, enforcement and street cleaning across the Borough have been reported to the Council's Cabinet.

Part of the extra funding was agreed last year using COVID monies aimed at helping get the Borough back on its feet.

And the rest was agreed as part of the Medium Term Financial Plan 2022 to 2026 agreed in February.

That enabled the authority to add an extra 26 streets to last year's roads resurfacing programme, with all work completed by the end of March this year.

And in February, councillors agreed to boost road resurfacing budgets for the next two financial years to the tune of £200,000 per year.

While welcoming the extra work that's been carried out, the Council's Leader, Councillor Bob Cook, repeated pleas for more funding to plug a huge shortfall in cash.

"We know the upkeep of the Borough's roads is very important to our residents and we are fully committed to improving our roads," he said.

"But the fact is, we had a £4million shortfall in funding for the Borough's highways infrastructure last year and that could get worse as the cost of materials soars.

"We'd like to do so much more but we simply don't receive enough Government funding to do a proper widespread hit on our roads like we'd like to.

"It's a national crisis - the Local Government Association estimates clearing the national roads maintenance backlog would cost £10billion and take over a decade."

The Council embarked on a drive to recruit 12 more Civic Enforcement Officers last October after committing an extra £410,000 to tackle anti-social behaviour.

And in February, councillors agreed to maintain that extra spending for two more years, which has seen the service grow its numbers from 24 to 36.

The additional numbers have helped to boost the enforcement presence in town centres as they bounce back from the pandemic.

And that has also freed up officers to carry out enforcement operations in estates and neighbourhoods across the Borough.

"This is a really important investment because we know that crime and anti-social behaviour are still major concerns for our residents," said Councillor Cook.

"Of course, crime is a matter for the police and we still have a job to do to educate the public on what our enforcement officers can and can't do.

"But they are making inroads in the things they do have power over.

"We've seen our officers leading on a number of high profile closure orders like the one in Parkfield earlier this month.

"Naturally, people ask what happens to the people who are causing the problems in these properties and we have to be clear and say that criminal activities are a matter for the police.

"But what do have power to do is gather evidence and get these problem properties closed down and we always seek to offer support to the people involved to change their patterns of behaviour.

"Our intervention always comes as a relief to nearby residents.

"In town centres, they're tackling obstructive parking and they've also provided a reassuring presence around the Globe on show nights.

"What we can say is that we're doing our bit. We're putting extra money into enforcement and we'd hope to see an increase in police numbers alongside this, though that's something we have no power over."

A weeds blitz on the Borough's busiest roadsides was launched, with street cleaning plus litter clearing on embankments and graffiti removal also stepped up.

Councillors agreed to maintain that extra spending for two more years when they met in February.

"These are things that we know really matter to our residents and that's why we're increasing our spend in these key areas," said Councillor Cook.

Details of how the extra £2.75million is being spent on roads resurfacing, enforcement and street cleaning across the Borough were reported to Cabinet on Thursday (June 23).

For Council news direct to your inbox sign up to our My Council Newsletter.